Are the arts the new cure for old age? Is that a positive outcome for the old or for art?

I’ve been surfing the web, looking for articles on creativity and aging. I found some that were truly wonderful, as well as a few unbearably dull essays produced by the academic worlds of psychology and sociology, and a lot of optimistic posts about the benefits of the arts for older minds. The post by a young medical blogger who worried about his already decaying 40-year old mind and body was an isolated one. “Creativity and aging” is a topic that fills how-to books and wins grants for programs. Art will give us a successful old age.

The growing popularity of the subject is due in part to a surge in the aging population. In 1999, the number of Americans over 65 totaled 34.5 million, or 12.7 percent of the population; by 2030 more than 70 million people or 28 percent will be 65 or older. Most dramatically, Americans 85 and older will more than triple by 2040 from 4.3 million to 19.4 million. By then there will be more older people than school-age children. This “silver tsunami” will produce a healthier, wealthier and better educated population of seniors. 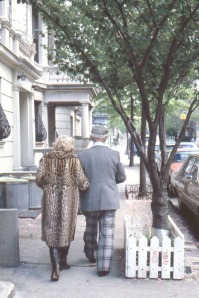 Presumably, we will see, sooner than later, older adults who aren’t afraid to be “old.” But that won’t be an easy achievement. I received a comment yesterday from a very dear young friend of mine who congratulated me on my blog and assured me that my body might be old but my mind certainly wasn’t. He either isn’t reading this blog – which is very possible because it must seem antediluvian to someone his age  – or he’s missed the whole point.

The point: I don’t want “old” to be a pejorative term anymore. I want to help turn it into a neutral, even complimentary description. Old is something most of us get to be, and it is filled with its own interests and challenges. It’s a good thing to be old and an artist.

Of course, it’s also good to be old and interested in braiding rugs, playing the piano, and writing memoirs. And yet, I have difficulty with all that how-to activity, partly because I don’t think the arts should be, or can be, about staying youthful and healthy. I think creativity is something that exists for its own sake, and it’s not always a blessing. Said May Wilson, “It’s a mixed blessing, this compulsion to make.” Making art can be hard, even punishing, labor. It can make some people impossibly eccentric, and less mentally healthy rather than more. The boozing writer isn’t entirely a cliché.

That doesn’t mean I don’t favor art classes for older adults. Art classes may very well be good for our hearts and our cardiovascular systems. But it bothers me that they may also be a new way to avoid accepting our old age; that creativity will become another panacea to keep us young. And it bothers me even more when art becomes one more means to that end, rather than the source of so much more – our values, our culture, the best of who we are.

One thought on “Are the Arts the New Cure for Old Age?”