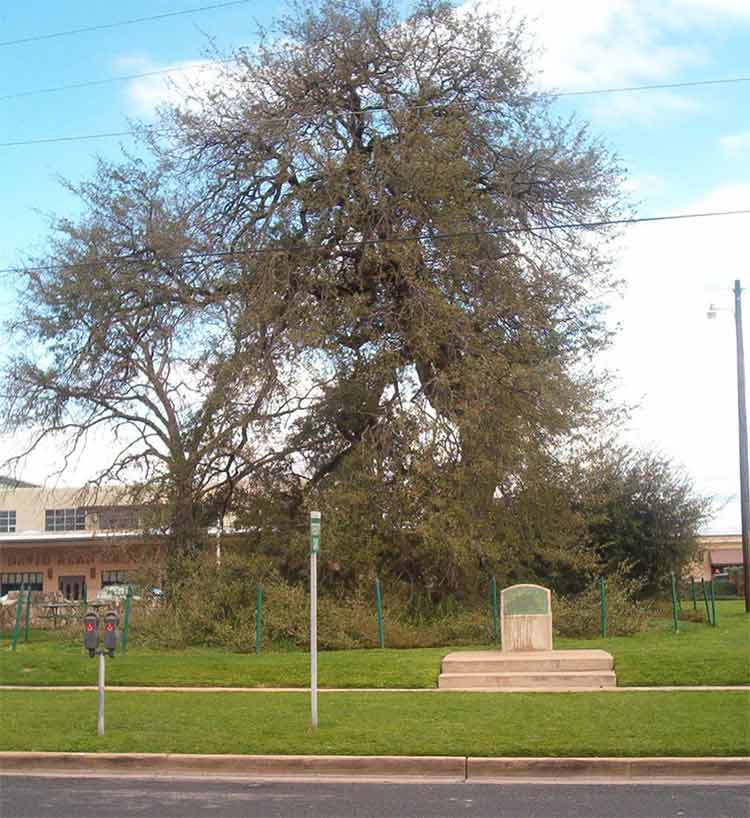 On March 2, 1989, Texas Independence Day, a busload of tree lovers made the last stop of their tour at Austin’s Treaty Oak. They were the first to notice that the tree was sick.
The Treaty Oak, believed to be more than six hundred years old, was the stuff of legend. Sixty years before, it had been designated the most perfect specimen of a North American tree.  It had been one of a grove of fourteen oaks that in Native American legend were the launching site for war, and peace, parties. The women of the Tejas tribe drank a tea made from honey and the acorns of oaks to ensure the safety of warriors in battle. It was believed that a meeting between Stephen Austin and local native American leaders negotiated Texas’ first boundary treaty under its branches.
As the other trees expired from development and old age, the Treaty Oak became more and more important. When it was poisoned in 1989, it had a 127-foot spread. The amount of poison administered to the tree was said to have been roughly 25 times the amount needed to kill it. Lab tests showed that the quantity of herbicide used would have been enough to kill 100 trees. Its survival was touch and go. The poisoning of the Treaty Oak became a cause celebre. It even made the front page of the New York Times. Children sent get well cards. Ross Perot spent millions. The culprit who tried to kill the tree (oddly, the act was meant to win him a girl), was sentenced to nine years in prison.

The healing has taken years, and as beautiful as the tree seemed to me last week, it’s not what it once was. But its pruned branches have made wonderful artifacts–gavels, bowls, pens, chairs…. In 1997, the old oak produced its first crop of acorns since the poisoning; they were distributed throughout Texas and beyond. The Treaty Oak has offspring!

My niece marveled that a tree could be so important to a city. So do I. And it makes me think.

We’ve poisoned the earth many times over. Its future is at least as much in doubt as that of the Treaty Oak once was. But somehow its healing seems to remain out of reach. So why this tree? Can we learn anything from it?
They say the tree has come to symbolize the strength of Texas. Its independence. It’s history is glorious, and entwined with the history of the state. The tree has become a symbol that people identify with. Said John Giedraitis, the forester in charge of the Treaty Oak’s treatment: “The tree is an innocent sort of creature. It didn’t do anything. If anything, it’s sort of giving all the time. For someone to take it for their own selfish reason, it really angers people. It’s upsetting to people.”

I remember a few decades ago people used to talk about the earth as Gaia (the name of a primordial earth goddess).  I’m sure some still do. I remember that she’s been called “Mother Earth” in many cultures, including our own. She’s an intimate, “an innocent sort of creature.”

Maybe, it’s time we began to treat her that way again.

One thought on “The attempted murder of a tree”