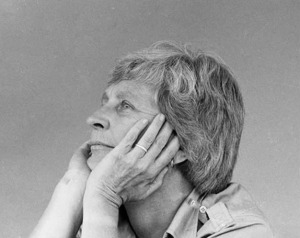 It’s difficult to write about Melissa Zink. I’ve seen only one art piece by her, and then briefly. Photographs, because they’re from only one perspective and most of her work is sculptural, can’t tell me everything I want to know. I need to see what she does in the round, and I need to examine its detail, because some of it is very detailed indeed. She has written much more about what she’s created, and how, than most visual artists do, and that’s a help. It’s also one of the reasons, I think, I’m so drawn to her work. She loves words. Her art is all about the experience of reading. She loved books.

She must have been a terribly dissatisfied person for most of her life. She studied art, chiefly at the Kansas City Art Institute where abstract expressionism was the rage. She didn’t like it. She couldn’t do it. She married, raised a daughter, and worked with her husband in a custom framing shop. Her painting, she said, was “uncertain, kind of whispy.” How awful it must have been to need to make things, but instead only frame what others had made. But she could read, couldn’t she? I’m sure she did.

In 1970, Melissa Zink’s frustration led to what she later called “a rebellious moment,” when she convinced her husband to move to the southwestern Colorado town of Silverton, elevation 9,318 feet. Something about the mountains, a feeling of freedom, began to change her, and change her life. Over the next five years, she divorced her husband, then married again. 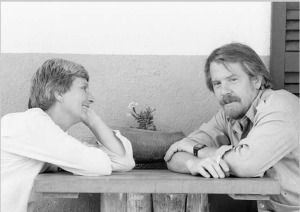 One day, saddened by her confusion about her life and its purpose, her husband asked her what she wanted to be. “An artist,” she responded. He encouraged her, and one day suggested that she might like to try potting instead of painting. That first pot was a disaster, but it was the beginning. Soon she was making odd little creatures in clay and setting them in ceramic scenes. In 1979, in her mid forties, she had her first gallery showing.

One of the wonderful things about Zink is that she never stopped evolving as an artist. When she died at 77 last year, she was still growing and changing. From the beginnings of her life as an artist in her forties, until the last, she had a wonderful sense of humor (chock full of  irony and whimsy). In her hands the book achieved a marvellous resonance. I’ll never look at one in quite the same way again.

From the beginning her goal in her art was to explore and replicate her own experience of reading, although she wasn’t always conscious that that’s what she was doing.  Her first ceramic sculptures in the late 1970s and 1980s were stories, but so multi-faceted.

This so-called story was a strong visual image and its accompanying feelings, she wrote in a speech in 1994. More properly I think it might be called ‘as if it were a story.’ I disguised myself as an itinerant potter who with her faithful companions, Dog and Valise, traveled the world, the past and the present. I became someone called Gypsy Dog and with my best friend, Hattie Max William, enjoyed another series of adventures through time and place.

She thought of many of her works as museums.

The largest of the museums, The Museum of the Mind, was built in 1982. I was beginning to be interested in metaphor and in this piece I used a mysterious structure filled with representations of art objects and odd debris, a metaphoric storehouse of images in the artist’s mind. One side is covered with names of my favorite artists, among them Stanly Spencer, Marcel Duchamp, Goya, Hogarth, Breughel, and many others. You can see a figure on her hands and knees searching among the shards for a lost image.

In the mid 1980s she began to use a wider variety of materials, especially wood and paper. In the early 1990s, she experimented for a while with arrangements: I would provide the setting, figures and objects which a hypothetical viewer-purchaser could arrange as she or he fancied.

By the 1990s, the number of elements in her works had multiplied, and many of them took an even more distinctly literary turn. Her figures became more abstract at the same time as they became more profoundly human.

Dante’s Dark Wood was “one of a group of pieces called ‘Sticks,’ some of which were derived from the Divine Comedy and some from the properties of the sticks themselves…

From my scatter shot approach, I hope you can see how intricate the process was, how varied and filled with odd twists and turns. And as she grew she understood more and more clearly the focus of her quest:

… from the unconscious came the understanding that what I had been looking for was a multiplicity of images. What I had so longed to catch hold of and understand was how to convey the linearity of books and of reading. I could see that the magic I wanted to express lay in presenting many images simultaneously and discretely, so that it would be impossible to see the whole at once. The reading experience, the looking-at-book experience is compressed from hours to minutes, but the structure is the same. That is, the viewer looks at one, then another, then another image, just as one reads another page and sees another mental picture or leafs through the illustrations of a book, pausing here, hurrying there. And with each image, another feeling. And I wanted there to be a simultaneous sensuous experience of an object which would consciously or unconsciously evoke old books. I knew other things as well: that I wanted to use paper, particularly old paper; that I could have text and use sculpture as much or as little as I wished, that the colors I loved were the colors of old bookbinding and end papers. I knew that the computer could reproduce all the type and borders, numbers and letters, worlds legible and illegible, illustrations from old medical books and catalogues, all the things I had looked at and loved. I had managed to smear the line between my life and my art ….

I’m not going to try to say more, or even quote more. This is, after all, only a post. Thanks to the Melissa Zink Retrospective, I’ve acquired enough material for a life or two, or at least a library of  long, long books. I’m going to conclude with some of my favorite pieces and a special thanks to Stephen Parks and the Parks Gallery in Taos, New Mexico for permitting me to use the images in this post.

My computer is back and whole after having received a hard drive transplant, and some fooling and fiddling. I should be eager and ready to produce a post, but I find I’m mostly befuddled. Partly, I suppose it’s a matter of us both — the computer and myself — needing to readjust. But it’s also that I’ve fallen in love with Melissa Zink, the artist I quoted in my last very short post.

Sadly, she died a year and a couple of months ago, so there will be no meeting the living, breathing artist, but she was prolific and there’s a lot to look at. She was also articulate, and so there’s a good bit to read. Her art centered on books and the experience of reading, and since I too love books, I’m especially eager to know her better.

But there are two problems. The first is that I don’t know her work well enough to write about it. Not yet anyway. The second is that I need permission to put up pictures of her work. And that may take some time. In the meantime, for anyone who’s curious, there’s a Melissa Zink Retrospective online that’s extensive and wonderful.

What we are looking for, whether in a gallery or a shop, is transportation to that remarkable state of mind which seems like a brief glimpse of Enlightenment. It is probably irrelevant how it is produced. The state of mind, I mean. Whether a Balinese tobacco container or a Rembrandt etching takes one’s breath away, what is crucial is to become breathless.

I started thinking about things that take my breath away, not necessarily art, though, from my point of view, they should inspire it. I thought of the sea; massive trees and seedlings; roses in the spring and bougainvilla on a San Francisco Victorian; old skin that’s like thin, white parchment; the smell of ripe peaches; french fries; the rattle and whistle of palm trees full of starlings. But what I stopped at — mostly because I have some slides and I don’t think I’ll ever come up with the right post for them if I don’t do it now — is clotheslines. 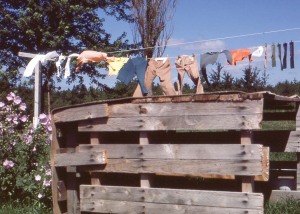 They’re history now, clotheslines are, since we’ve all gone to electric dryers. Not to say dryers aren’t interesting, spinning clothes have their own metaphorical power, I guess. But clotheslines are better.

Unless you’re very fortunate, there probably aren’t any clotheslines in your vicinity, so you’ll have to remember them, or imagine them. The shirts, dresses and pants still bear the impress of bodies, and the shapes shift as a soft wind fills each one, Sometimes there are stains, stretching, fading, tears and the patching up of them, that give us the details. 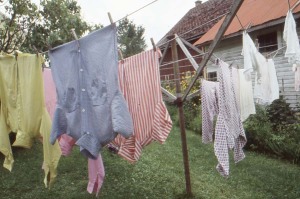 There are short stories, sometimes whole novels on clotheslines. White shirts tell us one thing, denim shirts another. Blue jeans and khaki pants are redolent of grease monkeys and farmers. Tee shirts flex their decaled chests and share their messages with anyone who will stop and look.

And then, of course, there’s the underwear. Boxers or undies, there’s usually something shy and small about underwear. It doesn’t move freely in the breezes that send the other clothes dancing. It looks mildly embarrassed, as if a public appearance wasn’t what it had in mind. 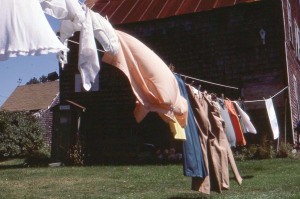 Clotheslines can be very beautiful. They’re enlivened by the wind and sun like ships at sea. In their careful arrangements we see the handiwork of women with bags of clothespins and baskets of cold damp cloth balanced on one hip on a lovely Monday morning (or any day of the week in these lax times). The sheets go up, the towels follow, the perfect cheerful clothes of families, telling stories she doesn’t know she’s sharing with everyone, anyone who will stop and look. 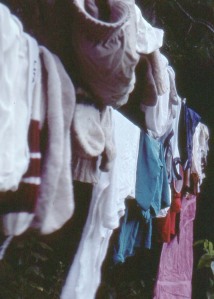 Not very long ago, I was in the Albuquerque Museum of Art and History, walking from one exhibit to another, when I ran across a fascinating piece called “Spectacular Helmet” and a quotation from its creator, Melissa Zink.

It’s like you’re walking around with an enormous suitcase full of magic and you are never allowed to open it, because the rules say that things in the suitcase are not worthy of artistic consideration. Worlds, childhood memories, pretend, fantasy, ______ story, all that. And so, until I could open that suitcase, I didn’t really have anything to work with. It was like trying to paint with your hands tied behind your back.

Unfortunately, my handwriting is so bad I can’t read the word that ends with “story” in the note I took.  And I’d never heard of Melissa Zink. But now that I’ve started to find out who she was, I’m fascinated, and I’ll have more to say about her soon.

But my computer is going into surgery tomorrow morning and is stuttering badly tonight, so this is it for Zink now.

Just take note: Says Melissa Zink, the artist must be able to use everything. 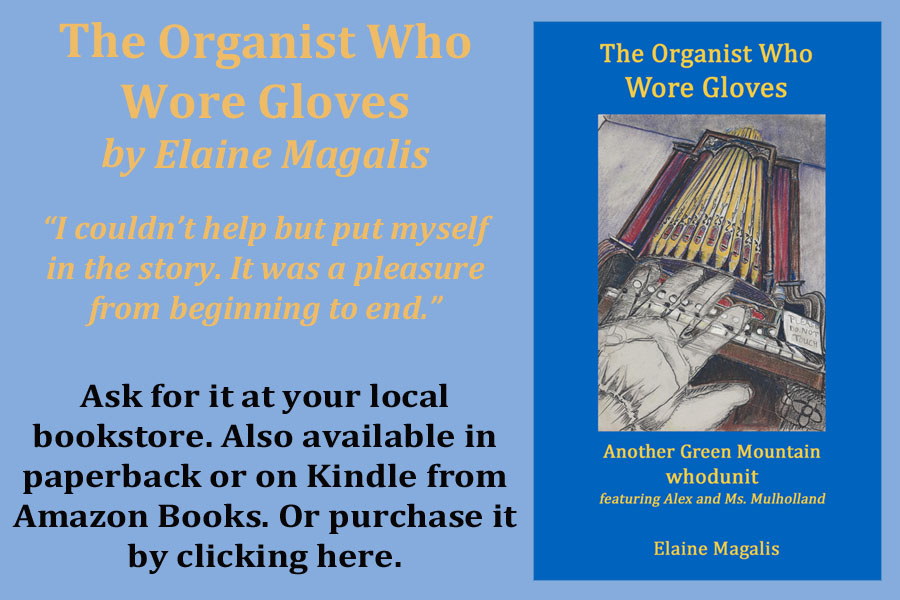